Writer’s Quote Wednesday is a weekly feature where I delve into famous writer’s words of wisdom and share how I have interpreted the meaning for my own creative endeavors to maybe help inspire yours! 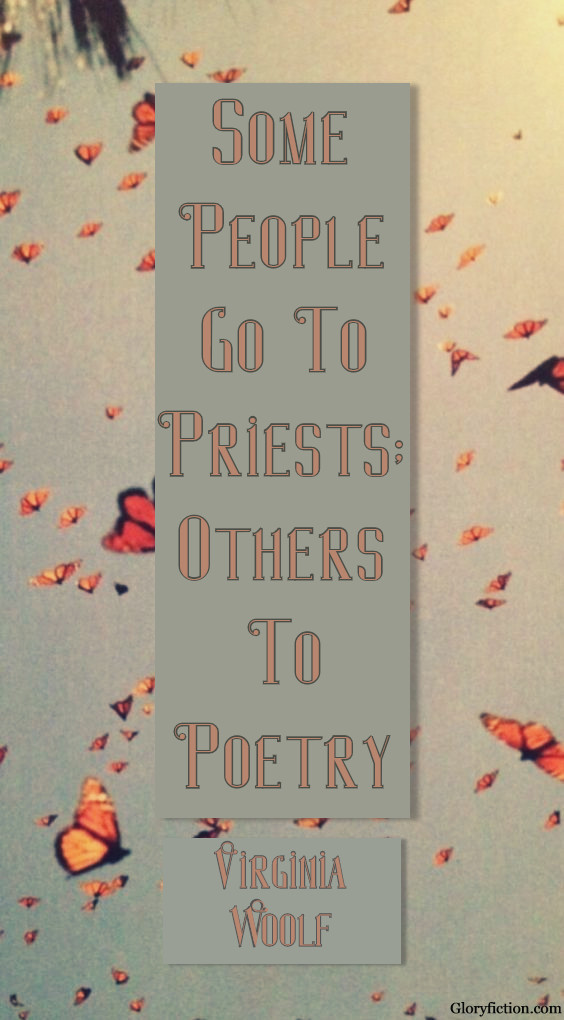 In its entirety this Virginia Woolf quote goes:

Some people turn to priests; others to poetry; I to my friends.

And though I am a very spiritual person (though, you guessed it, not conventionally so) as well as an extroverted friendly sort (don’t let the predilection to talk to myself fool you) I chose to focus instead upon the first half:

Some people turn to priests; others to poetry.

To muse upon. For I find it is more or less what had inspired the whole of my existence; creative and otherwise.

As far back as I can remember I always used some art form or another to express what I otherwise couldn’t seem to translate in any way that left me with a piece of my mind still intact instead of given away.

Through art, through creativity, I was able to channel my emotions in a clear and focused manner that took me out of them and myself. It gave me subjective clarity so not only was I able to understand myself better I was better able to figure out what I needed from the lack.

Half the time I barley even realize that I’m doing it!

I can remember that there was this one story line in-particular where the lead – a strong and courageous woman/ex-hooker/reluctant hero – was going after her injured friend who had been kidnapped by a rather insidious character trying his best to lure her into being the star of his S & M fantasy world…anyway, in a nutshell there were two others – professional heroes and all around “good guys,” the kind who on the outside you would think morally above this kind of deplorable underbelly shenanigans – who came across the situation – new to her world and friendship – but without hesitation went after her, in desperate want to help so that she would not have to do it alone.

Again, long story short, she still went through every obstetrical on her own – though unknown to her they were right on her heels the whole time – fully capable of doing it herself. She got to her friend, saved the day just before they showed up. The whole point being that even though she could she didn’t always have to. She now had people she could depend on, people who wanted to help, to show up and be there for her.

Well ironically enough this just so happened to mirror something that was going on in my life/relationship. I didn’t realize this correlation however until I began writing it up, realizing – oh duh! – that’s what I want!

I’ve always been the strong capable reliable responsible one. I take on any obstetrical and work my way through it, it doesn’t matter if I have absolutely no clue or experience I figure it out, i take it in stride, I get the freakin job done and with very little if any complaining of freak outs. I love this about myself and so do others…however in turn I’ve found that most people don’t want to know that the person they think and want to believe can do everything can’t.

Everyone wants a rock-steady and they don’t want to see that it is indeed capable of crumbling too. It’s that Manic Pixie Dream Girl syndrome. Some people make us feel so good about ourselves, make us happy, inspire and elate us so much that we forget they to are humans. That they need that kind of energetic jive fed back into them every once in a while. That a rock sometimes needs a shoulder. That a smile sometimes has to frown, has to cry and break down. That sometimes the hopeful turn hopeless. The happy get mad and the optimist cynical.

It has been a theme in my life that people want me around so they can feel some type of way about themselves, the minute I might want something from them in return they peace out. the minute my humanity exposes my vulnerability they want nothing to do with me.

It has led to some insular times in my life. Some crippling depression and breakdowns – which for future reference for any of those who face similar situations, hermitage is not the answer!!! The worst thing I ever did was give up my worlds outlet for that of the world of man. To seek from others when I was running on empty to help, to ease, to fill me up and help understand. There was no perspective to be had in that only projection, assumption, more confusion and isolation.

You must forge the ground on which to be ground in and on. Others can take it away to easily, can cause it to fracture and break apart. At least for me I needed to be solid and filled up before I could reach out. Sure it can help to talk out loud but only if the right listener exists in your life. One who can read between the lines of your words and meaning. Who hears you for you and what the words you speak mean in regards to who you are at the core of your essence, but that is rare.

The only thing that I find that makes any of it better, that helps to put it into your perspective is finding the commonality in music, in books, in poetry and other forms of art, where people like you felt only to capture the feeling in a piece of proof that will show others they are not alone. To gain perspective through expression by absorbing it through others creations and purging it through my own.

Confession in the form of physical expression, putting it out there for all to see, exposing yourself in the safety of something that is like home to you. Something that to exists in the core of you but as a strength, using this momentary weakness as a form of motivation, to turn it into beauty so that it may be looked upon as experience and taken back in as pride.

Words can ring so hollow when only spoken and taken for their flat effect definition. Adjectives can only do so much, it is where they are coming from that needs to be heard, seen, and addressed. Between the lines of defense and hurt lies the pain that needs comforting. We overlook cause and only treat the symptom thus perpetuating the cycle of pain, the pattern of reaction, and poison of deflection.

Round and round we run from the truth for rarely do we know the words to speak the it reality it needs to express. We need to express, but the freedom to has been bred out of social acceptance and convention. So we turn to things unfulfilling that will only kill us faster. We try to pray it away, pray for assistance without effort, for some magical answer to form out of the blue as we hide our faces from the truth.

But we have to face it. Not over intellectualize it, over think or analyze it, we need to express it. To feel it in order to see it for what it really is. The truth, pain, disappointment, upset – and any other emotion you can think of experiencing – it is never as scary, as awful, overwhelming or intense as the monsters we are convinced we need to protect ourselves against.

In truth an emotion only tends to last about 90 seconds – that’s science – it is out minds that take over from there, the id, ego, or whatever it is you want to put it to.  It is us lashing out from a wound we would rather play victim to than accept, but no one ever signed up to life wanting to believe themselves the fallout of their own story, that shits ingrained, taught, programed, and beaten in and down. We all want to be the hero, the star, and stalwart center of our saga.

So I say funnel it. Don’t think, just do. leave the deprecation, the doubt, and the blame for another day, get down to business, look that darkness in the eye, and express yourself and your feelings in their raw form. Bleed into the page, upon the canvas, into the music, the movement, the scene, or wherever else feels the provocational ecstasy that is voice without narration or dictation but pure emotion.

Do it so that you might look upon it from the outside with understanding and compassion for it is not just a part of you but now is made physical to stand as yet another testament to time and proof that no one is ever alone in what they are or what they do.

One thought on “Writer’s Quote Wednesday”