A weekly feature where I delve into famous writer’s words of wisdom and share how I have interpreted the meaning for my own creative endeavors! 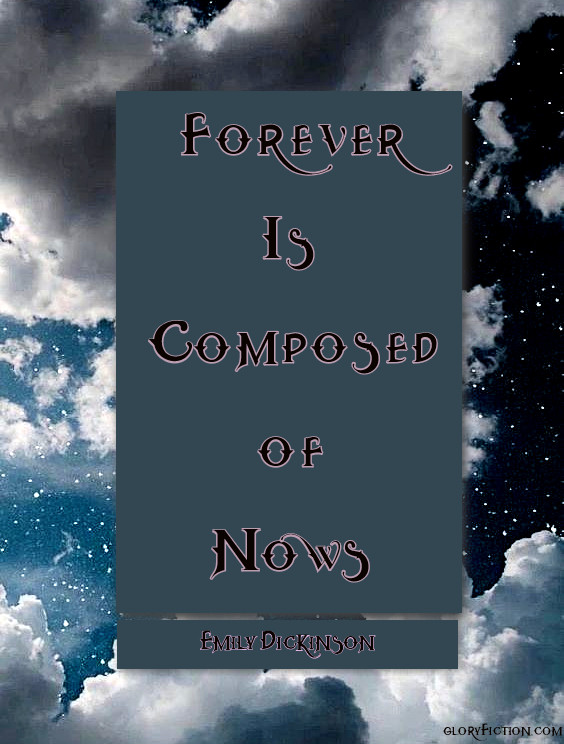 Forever is composed of nows

This is everything that one needs to remember when living there life, making plans, setting goals, and just simply existing. I know that it is something that I need to remember being someone born who was always planning the next step of her future.

I never really liked being a “kid“, never really jived with books, series, etc. that centered around kids my own age or there abouts. In my many realms of make-believe I was always an adult, and always my own character – I also never liked assuming other people’s identities ( that came later, *menacing laugh intended to be a giggle), the ego of youth eh?

I guess I found it limiting if not a bit *yawn* boring. I believed that once you make it past that remarkable age of eighteen then the fantasy – the things that you can only imagine and dream of as a child – become the reality. You are in the driver’s seat and can be taken seriously for all you have to offer.

Really that was the main squeeze of the situation, being taken seriously. I’ve always had a hang up on that. On equality. Blame the Libra in me, I guess, but I just can’t stand people brushing me or things that I am passionate about off like I’m just some rambling dreamer, some bohemian beatnik who doesn’t know any better with not even a toe in the shallows of reality.

I know I’m unconventional, I know I am a creative liberal, all innovation and odd-ball, but I try to treat all I do and all that other’s do – especially if they come at me with some passion, seriously I could find anything interesting if the person conveying the topic was into what they were talking about, if my listening with interest got them all excited because what they are talking about excites them and now they can share, I mean who doesn’t want that, jive that, crave that? – with legitimacy and respect and  I would like the same from other’s.

Unfortunately time and circumstance also come into play. I grew up and became frustrated and insecure with the constant reinforcement of limiting beliefs, an unfortunate side-effect of age.

Suddenly the pressure of what you have to show for yourself consists mostly of dollar bills and status prerequisites that stamp you with the proud medal of “adulting well.”

Effort and experience count for very little in our society unless they can be observed in the obvious constructs of exhibited structures.

So as creatives it can be hard to remember that it’s not all about the end goal, that book deal, that movie deal, that script sold, that contest won, that award nomination, etc and so forth. It takes a great deal of time to get to those places and a GREAT deal of hard work, drudgery, dedication, disappointment, failure, burnout, EDITING! drafts, words, blood, sweat, and tears go into those ends means.

One doesn’t become a writer to be famous, yet how often does this goal cloud the due diligence necessary to take you there? How many see their book in stores but stop when its month two of writing the darn thing and they’re stuck, they can’t find the time, they’re overwhelmed with second-guessing, with the contemplation of industry standards, how to publish, where to publish, do I need an agent? How do I get and agent? can I get an agent? am I even good? what am I even doing with my life?!?

And of course the ever present where do I start and the should’s and would’s that come with that overload.

We want to get to Z, and are so transfixed and hung up on the how that we can forget the why. We can forget to fully engage in the process, to enjoy the ride of writing, of story boarding, creating, and the get in there so head deep you can’t even piss without having an epiphany that will further the intrigue of your script.

So much goes in but we focus so hard on what will be got out, that we forget to fully engage in the process of production.

Forever is composed of nows

I fall, and have fallen many times before, into this trap, of getting ahead of myself and projecting concerns over whether or not I’m doing it right, if I could be doing it better, if this or that is even the right thing to be focusing my energy on, and indeed whether or not there is a purpose to it at all!

So much sacrifice goes into seeing your dreams come true that is can feel like loss is all there is in the time it takes to achieve that win, any win. Desperation sinks in and you go FOMO central. You second guess your purpose, you wonder if it’s a waste of time, if you’re not just some hack who just refuses to live in the “real world” because something, something, etc and so forth.

Suffice it to say it sucks.

You want to be in it already, to be doing it from a place of serious professional not just writer by word of mouth, the dedicated but starving artist bum.

But let’s just stop for a moment and look at things subjectively. Let’s put into perspective the other side forever. When you’ve accomplished your goal – no matter what it is – you look back on what it took with reverie, with nostalgic fondness and delighted pride, but also a tinge of regret. The secret wish to go back – now that you’re secure in you position, now that it exist on more than just your endless belief and perceiving spirit – and really enjoy it for all that it was. To do it in a better way and truly embrace the journey.

I know in many ways that’s how I look upon my youth, so dedicated and confident, too easily corrupted and affected by others doubts and lack of respect. I do wish I would have said fuck it and gone pel-mel into everything I believed. Just created for the sake of creating and figured out the practical application all later! I wish I would have screwed the time spent doubting and just done. Because no matter what at the end of the road you’ll either have something to show or something to regret.

The shame, the uncomfortable, the embarrassing, the lack and sense of social/peer debasement wont matter as much as what came out of it with. So wave that flag high and proud, freak.

Your forever is based on the everything that you do now, so why not paint your yellow brick road with the engagement of its walk? Everything happens for a reason so why not engage in better reasoning? 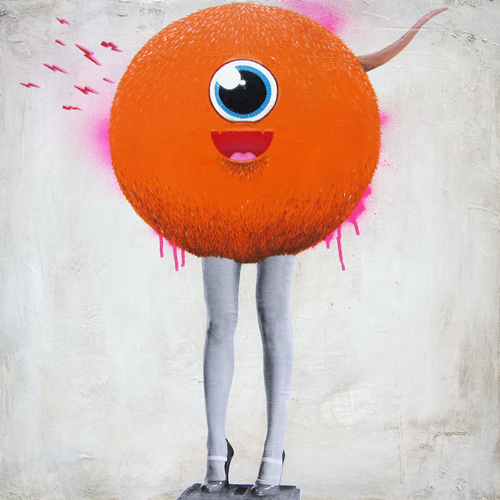